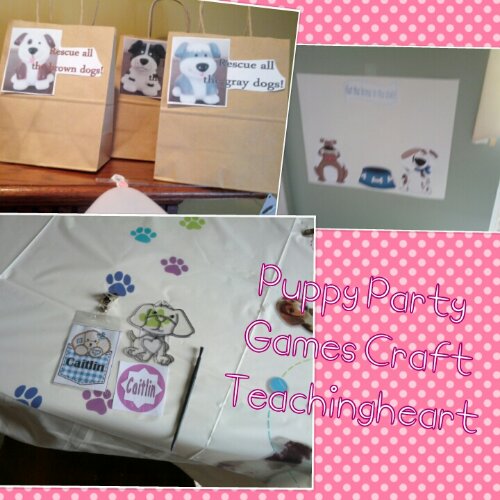 If you have followed this blog or know me personally; you know I love a good themed party!  I love planning and executing a themed party…  We have done Spiderman, Star Wars, and Lego to name a few…   I spoil my kids with a homemade party on their birthday rather than gifts…  My ultimate goal is that someday when I die they will recall the cool kid parties that were truly a labor of love from their mother…  Ha-ha!!!  But, seriously!!!

For my daughter’s 7th birthday party we had 17 of her friends and classmates over to PAW-TAY!!!  It was an adopt a puppy party!!!  Two hours of puppy fun!  I managed to fit all 17 in my dinning room for crafts and cake.  My dinning room is not huge, but it worked! 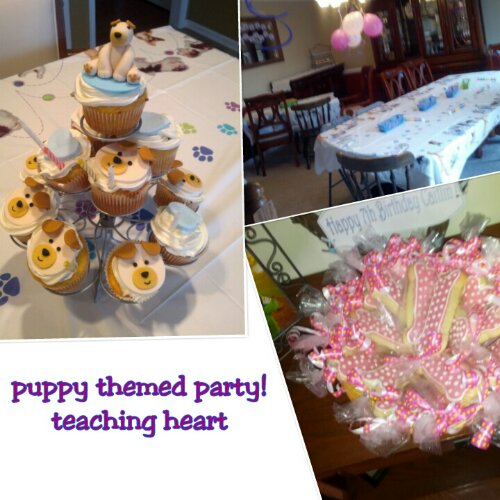 The paw-tay started with arrival.  Each girl found their name and started on a stained class puppy craft when they arrived. 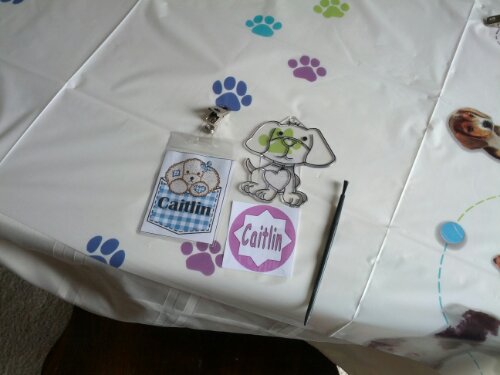 Once everyone arrived we went on a puppy rescue hunt.  I split the 17 girls into three groups.  Each group was assigned a colored dog to hunt for (brown, gray, black).  The dogs were rubber (like rubber duckies – but dogs) that I had purchased in the Easter section at K-Mart!  You can see a picture of what each dog looked like below.

Each team had to find six of their color and the first team to return to me was the winner.  They had lots of fun searching my house.

Later after the adoption which I will explain below… we played four other games.  For these games we broke the 17 girls into two groups (about 8 per group).  I did two games with them and my husband did two games with the other group.  We then rotated the groups.  This way each girl got to play all four games (in smaller more easy to manage groups).  The games were:

Pin the bone in the dog bowl! 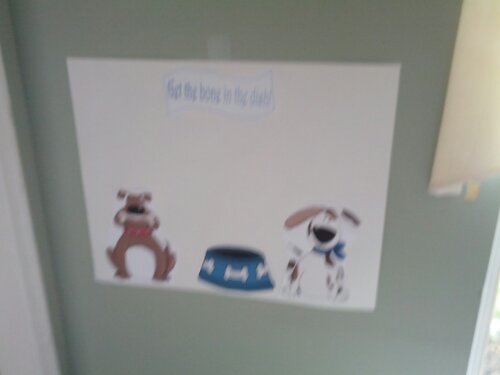 Puppy Bingo – which I made with graphics from online…  Everyone had all the same pictures on their cards.  I just mixed the pictures up so each child got a different card.  But whenever I called a picture they knew it was somewhere on the card.  The M&M’s were used as markers.  After we played a couple of times, the girls ate their M&M’s 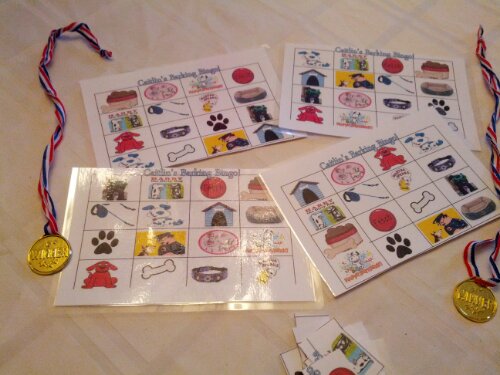 Musical Dog Tags – (Played kinda like Musical Chairs)  – I used the ribbons seen in the picture above (you can buy them at the dollar store in packs of 12).  I placed 1 for each girl in a straight line on the floor.  I played WHO LET THE DOGS OUT and had the girls crawl in a straight line back and fourth like dogs to the music.  When the music stopped they hurried to put on a dog tag.  Each round I removed a tag until only two girls were left.  The last two girls battled for the last ribbon.  Of course they were all TOP DOGS so I gave each girl a ribbon to take home.  They were thrilled.  It’s easy to please a first grader.  They loved this game and wanted to play again…  It was so funny watching them crawl back and forth!

Puppy Relay – I laid out two crawl tunnels and at the end of each one was a pile of raw-hide mini bones (dollar store for a 6 in a pack).  A few feet down was a dog dish (dollar store).  The girls were broken into two groups (about 3-4 a group) and raced.  They had to put a dog toy under their chin and crawl like dogs through the tunnel to the bones.  They had to grab a bone and put it in the dog dish.  After that they had to turn around and go back through the tunnel and hand the dog toy under their chin to the next team member.  First team to finish wins.  They loved this as well!

The main point of the party was to adopt a puppy!  This was a huge hit and I will say it beat BUILD-A-BEAR in my own opinion!  Cheaper minus the fluff; but, just as fun!! 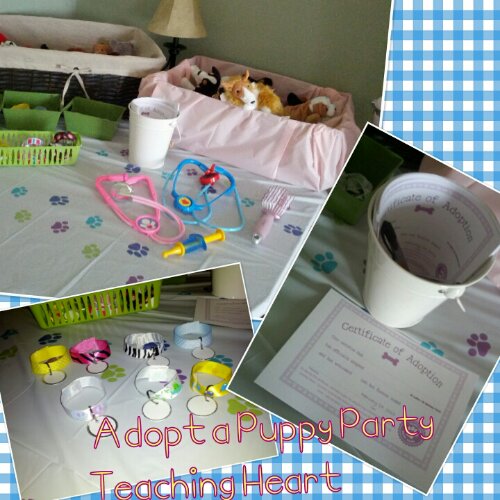 I went to Ebay in my PJ’s and with a cup of coffee in hand and scored a lot of 26 stuffed puppies / beanie babies…. FOR $20.00.  All in great like-new condition.  Once the box of puppies arrived I washed them in my machine.  They really looked new! 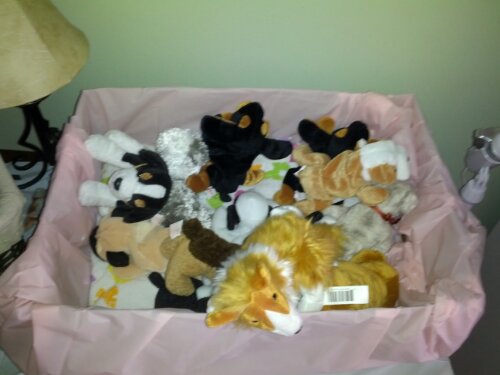 Then I got a variety of ribbon, velcro circles, and dog tags. I used these materials to make dog collars. 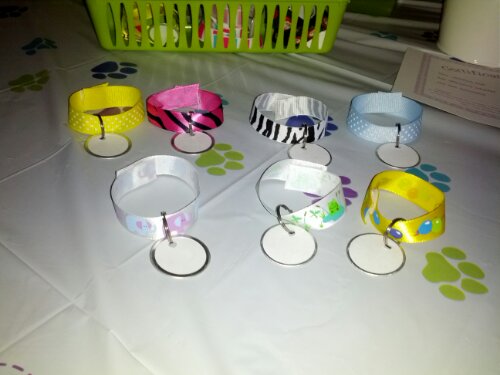 Before I started the adoption process, I gave each girl a dog carry case .  They were to decorate their box while they waited their turn at the adoption spot. 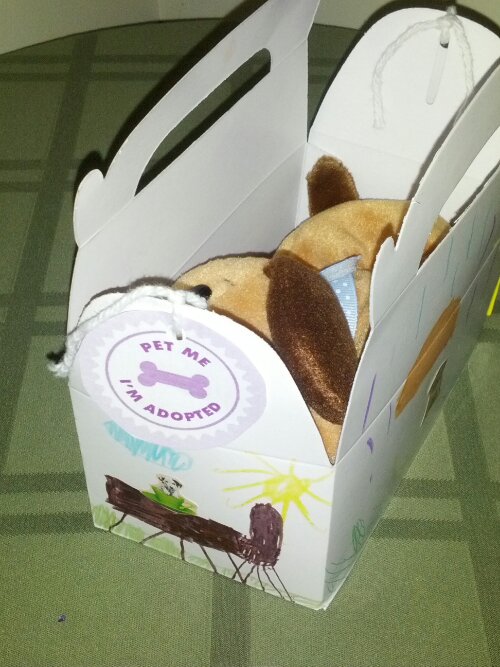 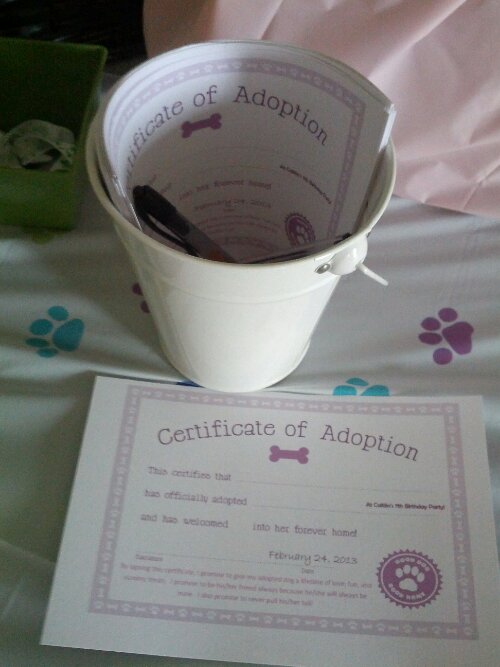 Free printables collections from Chickabug in pink and blue was a huge help. You can download them from her blog. I modified the printables found there for my daughters party!

Then they gave their dog a check up and a shot.  They also brushed their dogs.

The last thing we did was have cupcakes, ice cream, and puppy cakepops!  2 hours exactly and so much fun! 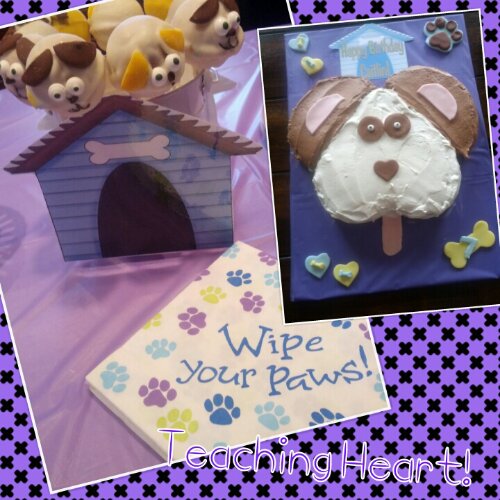 Phew another year of memories have come and gone.