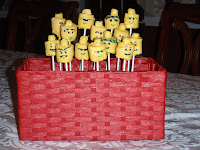 Gearing up for a Lego Birthday Party for my son.  We have done BIG Star Wars and Spiderman Parties in the past.  This year we are keeping it as simple as I can possibly stand.  He was allowed to invite four friends over for four hours of Lego Fun.  We will play Lego games, go mini-golfing, eat, and have fun building.

I saw these lego pops and had to make them!!!  They looked easy to make and I think I even made it easier than the directions on the site I found them on.

First off…  Get a bag of large marshmallows

and an edible pen

!
I let them dry in a Styrofoam square. 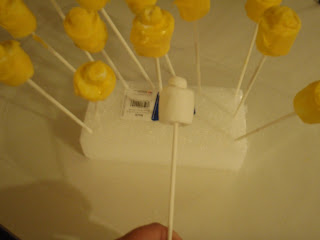 Put the large Marshmallow on the stick first and then add the mini marshmallow on top.  Roll the two mallows in the melted chocolate and let dry.  I did use a butter knife to smooth the chocolate and make it even all around the Lego head.  Once they are dry, draw on your face with the edible pen.  My hubby even had fun drawing the faces with me. 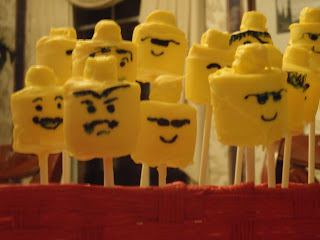 Aren’t they cute???  I will add them to the table with the snacks and cake.  I also wrapped some to put in the treat bags. 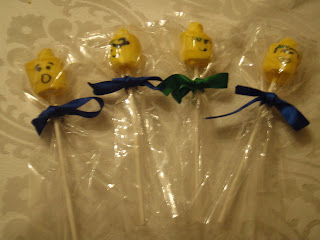 These were fun and easy to make!!!
Now on to making the homemade Lego Games and Some other Lego Fun which I will post later.
Google+