I make my kiddos homemade cakes every year.  It’s one of our birthday traditions.  My son’s cakes have included…  Winnie the Pooh, Train, Thomas, McQueen, Spiderman, Scooby Doo…  This year it is a Lego Brick theme.  If you look online you will see many beautiful Lego Brick Cakes out there…  like this one I found here.

Is this person who made this from Ace of Cakes or what???  I will say their directions for this cake do not fit the picture.

If you google Lego cakes in images, you can see a million tries at this cake!

My try probably falls somewhere in the middle of the pretty scale.  I know it will taste awesome because I used my Grammy’s Yellow cake recipe!  Here it is.  Ta-da! 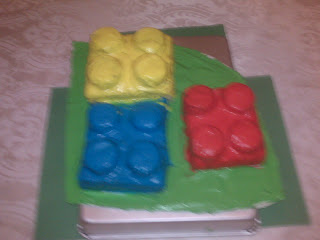 Now, I ended up making a sheet cake.  I actually had enough cake for another brick…  but at around 12:30 last night that brick ended up in the trash because I was tired and began to think…  Who is going to eat all the leftovers???  Me, of course!  I don’t need a yummy tasting cake staring at me following the birthday weekend.  So a big portion ended up in the trash!  Better there than on my hips later.  Right?

I used Little Debbie Cup Cakes as the knobs on the Brick.  Some websites tell you to use large marshmallows or rice krispie treats shaped as circles.

You can’t tell from the picture, but one brick is on top of another.  I used a large thick poster board as my bottom.  I then iced that in green.

As easy as this may look, it wasn’t as easy as I thought it would be.  The Birthday Boy hasn’t seen it yet.  When he does I am sure I will think it was worth the work when I see his toothless smile.