This summer has been great. We have played, played, played! The kids had a blast and kept active. My philosophy is busy kids =’s well behaved kids =’s happy momma!!! That is really how this summer went. We were super busy and I didn’t have to yell much. The summer flew by. I am sad that today marked the first day of school . At the same time it is good to get some structure back to our lives.

Since this summer was such a blast and the kids were well behaved, we decided to celebrate with a Back to School Party in the park complete with games, crafts, and treats. 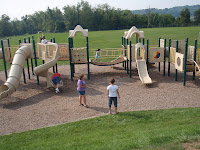 When the kids arrived at the park they colored a picture of a school bus. If you google Back to School Coloring, you will find lots of coloring pages to choose from.
Then we broke the kids off into teams of four and sent them on a back to school scavenger hunt. Each Team was given a team color, a map, a baggie to collect cards in, and stickers to mark their found cards off on the map. 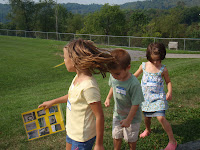 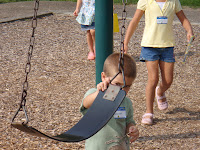 Setting this up: A few days before the event, I went to the park and took pictures of various objects around the park. I took pictures of things all over the park; such as, sliding boards, ramps, picnic benches, signs, soccer nets, letters, numbers, swings… I took a total of 36 different pictures with the idea in mind that I wanted each of the four teams to go to nine places. Then I went home and printed each of the pictures twice. I placed nine pictures on a map of one color. Then I placed the same nine pictures on the same color and created cards of the 9 pictures. I did this four times. This way I could break the kids up into four teams (red, green, blue, and yellow). The day of the event I hung the (9 of each four colors =’s 36 cards) cards around the park. I taped the cards to their given object. So if there was a card with a picture of a swing, I taped the card to that swing. 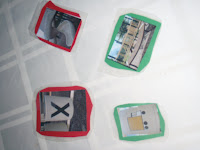 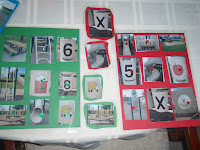 How the kids played:
I broke the kids up into teams of colors. There was a red, yellow, green, and blue team. Each team was given a map, star stickers, and a bag for collecting their cards. The kids would look at their map and go to the given area on their map and find the matching card somewhere in the vicinity. They would then put the card in their bag and mark off the object on their map. The idea was to find all nine card on their map. Also, staying with the back to school theme, they had to find four apples of their team color to give to the teacher. 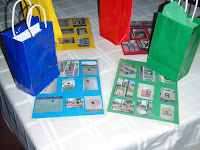 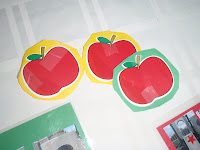 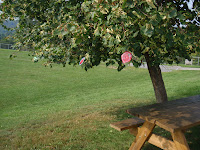 This seemed to be a hit with the kids! I would definitely do this scavenger hunt again for a birthday party or another back to school party. It worked well and it was easy to make and set-up.
Another activity that they enjoyed was the back to school relay. There were twenty kids so we split them into two teams. I set up a relay for each team member to run through.
1.)Get out of bed. (Sheet on the grass)
2.)Turn on the light. (Run over to a press light and turn it on)
3.)Eat breakfast. (Run over to lawn chair, sit down, eat a pancake)
4.) Put on backpack.
5.) Run through tunnel
6,) Jump in hoop and yell, “I am ready for school!”
7.) Run to cone (school) touch it and run back through and tag next person.
A great way to end a fun summer! I hope you had an awesome summer too!
Google+