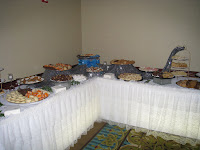 If you have ever been to a wedding in Western, PA then you have probably seen a cookie table at the wedding. All the weddings I have been to in this area always have a cookie table. I grew up going to many weddings in PA so I am use to the cookie table thing. However, when you tell out-of-staters about a cookie table, they look at you kind of strangely. I have been to many out of state weddings and one thing missing at all of those not in the Burgh weddings is the…. yep, cookie table. One thing is certain- the cookie table is a tasty addition to the wedding reception that is probably unique to Western Pennsylvania.
My good friend Nancy is nick-named the “Ball Queen” for her awesome buckeye balls she makes. She makes the best and they always look so perfect. She recently made a ton of cookies for her nieces wedding and she was kind enough to document the day with a nice blog and pictures to match. Thanks Nancy!
A Cookie Tradition

My oldest niece, Danielle got married last Saturday. It was a terrific day for all of us. She married a wonderful guy named Tom who she met on Match.com a couple years ago. He met our entire family two years ago at the wedding of her younger sister. We are not always the quietest family and there were many stories from that wedding that were extremely memorable. Let’s just say, he was a keeper if he came back after that weekend! Now, on to the tradition. If you have ever been to a wedding in western Pennsylvania you know all about the cookie table. Family and friends bake for weeks before to put out a spread for all the guests. I had one at my wedding 17 years ago, my niece Diane had one two years ago that I baked for and I did the same for Danielle this time.

My contribution this time around was about 65 dozen cookies. Iced sugar, peanut butter blossoms and peanut butter balls (aka Buckeyes)
consistency. I used teal icing in the jar from Michael’s. It was dark so I did my best to marble it with white. Teal was a really hard color to match and find. I usually use non-pariels on the peanut butter balls to match the occasion but teal ones could not be found. So I used white chocolate and some with white non-pariels. I didn’t really like either but they still taste good. 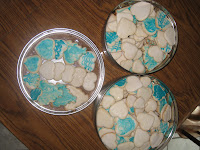 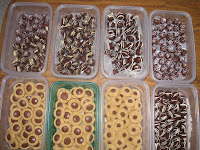 I will include the recipe for the peanut butter balls at the bottom of this. However you can go to the closest store for the recipes for the other two. Betty Crocker is the best! I use the bag mixes for all of my sugar cookies. It’s cheap, easy, and quick and best of all they taste great. For the iced sugar cookies, I use an icing made from powdered sugar and milk. Add the milk by tablespoons until it’s the right
For the peanut butter blossoms, used good old Betty again. Hershey no longer makes the mini kisses for baking but I had some left over and used them on some of the cookies. I used the chocolate disk melts for molding chocolate on the rest. I really liked how they looked. I don’t like to use full size kisses since I make my cookies more bite sized by using a smaller cookie scoop. 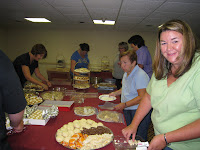 On the Friday before the wedding we all met at the hotel where the reception was being held. There were 9 of us including the bride, groom, their mother’s and the 7 month pregnant matron of honor. It only took us about 45 minutes to get all the cookies on trays and covered. Many hotels don’t like doing this so they charge an obscene amount of money so everyone does them on their own. Some of the cookies were bought, mostly the thumbprints, but the majority were homemade. The morning of the wedding my sister’s in law brought more cookies from Delaware and Michigan. I believe there were some more from the groom’s family as well. 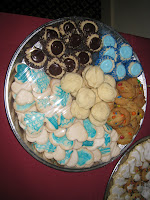 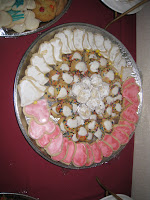 After the ceremony, the reception was held at the hotel. They did a great job setting up two tables one either side of the ballroom. My sister, Micky, supplied Styrofoam containers so the guests could take some home. At the end of the evening there were still a lot left. Some guests took full trays home with them. We had about 7 large trays left when it was all over. We took them to the party room for breakfast the next morning. My 7 year old thought that was the greatest! Pop and cookies all at 7 am, every child’s dream breakfast. The remainder went to the school where Micky works on Monday morning. 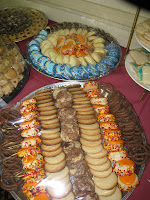 It was a wonderful time for our whole family. We wish the bride and groom all the best in life!

There were a lot of things that I thought were great ideas. They may not be original but they were new to me. First off, for the bridal shower, I emailed friends and family of the bride and groom and had them send me favorite recipes. I then went to Kraft.com and made a personalized cookbook. I was able to put a picture on the cover of the couple. It was really nice. Tastebook.com also does a similar item but I’ve not looked into that site.

Instead of place cards for guests with a boring Table #12 on them, Danielle and Tom had the tables named for meaningful things in their life. Each table had a picture frame with a photo of the name of the table. For example, the Neil Young table had a photo of Neil Young on the cover of Rolling Stone Magazine. The Penn State table had a picture of the Nittany Lion and so on. It was interesting because there were things you knew about the couple and some things you didn’t.

The couple chose not to have favors at the reception. Instead they made a donation to the Eye and Ear Institute of Pittsburgh. Several years ago, before the couple met, Tom had been in a very serious bicycle accident. Even though he was wearing a helmet, he suffered a severe head and eye injury. He was in a coma for a time as well. Fortunately he recovered and is doing well now. This was their way of saying thank you.

Danielle and Tom had an awesome photographer. Her name is Randi Voss. http://www.randivoss.com/. At the reception, she had a laptop with pictures of the ceremony on a slide show. With in the week many pictures were on her blog under Danielle and Tom’s name. They are gorgeous and we’ve spent a lot of time looking at this wedding and some others.