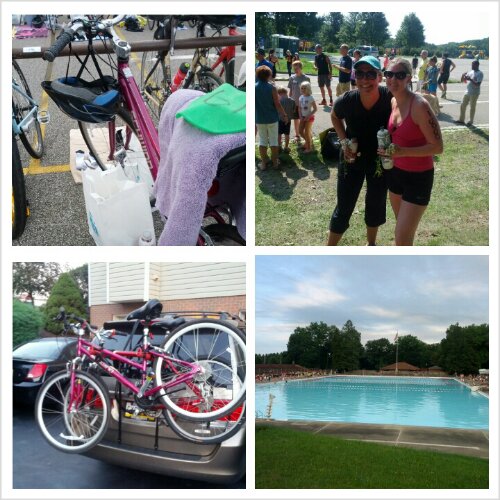 Woot, had one of those bucket list moments I want to share with my Teaching Heart Peeps!!!  It goes along with the Moo, It’s Monday Series…  that I HOPE to start back up again in September.  I swam, biked, and ran my first ever Triathlon.  It was  Janney Baierl Family YMCA Triathlon in the North Hills of Pittsburgh!  Pool Swim 700 meters, Bike 12 Miles, Run 3.1 Miles!!!  All at the same time of course. I have done other runs in the past, like this one and this one.   I have never done a triathlon before…  not to mention I did this to my ankle less than a year ago… 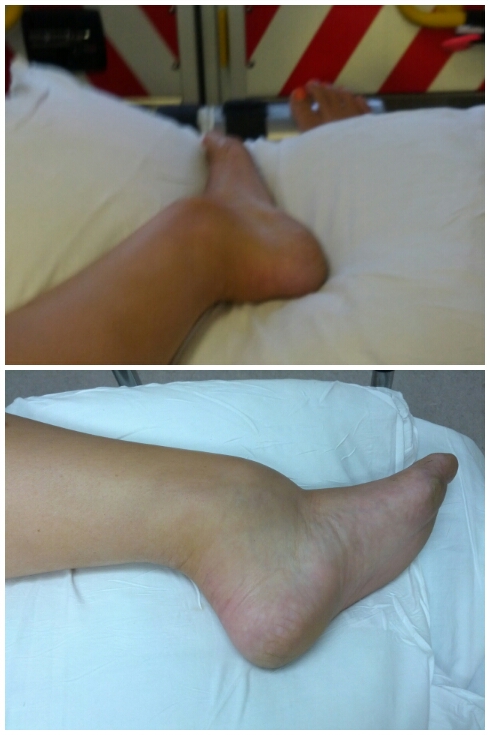 When one of my friends (Mara) asked me to do  this in July, I thought… wow, what a great way to celebrate a year back on my feet after the surgery and bionic ankle fix!

Note the July (when I decided to do a race in August)…  my training was less than a month.  Yes, I had been already running three miles… but my swimming  and biking (especially biking) were extremely lacking!!!  So I spent the next four weeks fine tuning my biking…  mostly learning how to switch gears (thank God my 10 year old is ready for the Tore de France and was my coach on that part) and worked on my endurance on hills (thank goodness I worked this or I would have never made the four big climbs in this race!!!)   Not to mention the whole idea of getting straight off your bike and starting to run…  If you haven’t tried that, you should…  it’s a funny feeling getting off a bike and then starting to run!   I will tell, you a BIG tip…  on one of my biking and running “Training” days, I rode 10 miles and then put my bike away and started running down the trail for about a mile.  For the first mile, I swear people were looking at me funny…  Around the first mile my head was itching and I reached up to scratch and guess what???  Yep,  I was running with my bike helmet on…  lol!  Luckily for the race, I remembered to take it off.   So my tip…  slow down enough at transitions to remember to take off you bike helmet!!!

About the race from a first timer: 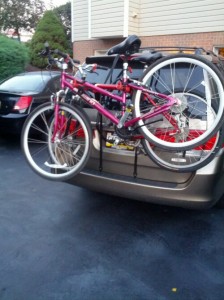 Mara and I loaded the bikes and headed out.  My poor friend had to listen to me talk constantly all the way there – anyone else can’t stop talking when they are nervous???  We arrived an hour before our start time (8:45).  I was mostly nervous about the biking… so I could not wait to see the big hill Mara had told me about it…  Yep, It was big and long…  but I tried to do many hills over the past few weeks and felt like I could PROBABLY get up the hill without walking my bike.  That was my fear, what if I could not make it and had to walk it.  I knew that I had to do that hill four times.  The incline isn’t too steep – but it is a little steep and it is pretty long.  I guess it has to be a challenge, right?  Here is a picture of the start of the incline…  It’s hard to see from the picture…  but the hill is a little more than gradual and long! 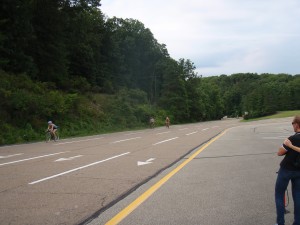 I am very lucky I had a friend to help me get through my first triathlon.  Mara had done this race three times and told me all I needed to know… Transitions can be confusing and if you do a triathlon make sure you know how they work beforehand.   Also, know each course and if you need to make laps around the course.  For this race it is five times up the big hill.  You count on your own…  but you go over a mat each lap that counts too.  You can be disqualified if you skip a lap… so make sure you count correctly. 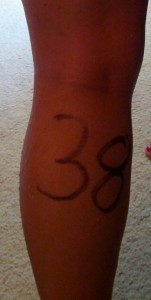 They give you an ankle chip that you Velcro around your leg that will track you throughout the race.  This is how they know your times for each section of the race.

Then we set up our gear at the transition station… 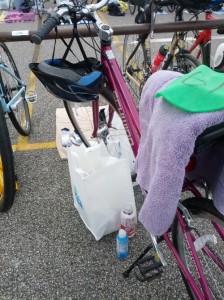 Basically, you get a race number and you need to find that number at the transition station.  Your bike and all your gear go in your small area…   Start to get ready for the swim…  I wore a LL Bean Tankini with a skirt (I may have been the only skirt swimmer there….  but I could careless…  I was comfortable…  )

Most people wear regular sport suits and some wear the tri-gear.   I definitely stood out in my skirt.  LOL!  Head to the pool… 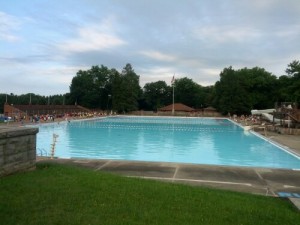 They give you a lane and a swim cap.  You have to wear the cap because they use the number on it to count your laps.  The swim I was least worried about… except for getting out of the water.  When I practiced this in the deep water, I pretty much looked like a beach whale trying to get myself out…  Luckily, there was a ladder in my lane.  Yeah me!!  So my mind was eased.  There were four people per lane and you just ask each other how fast you swim.  I expected to be done with the swim in 18 minutes and the other guy I started swimming with was expecting 15, so I let him lead.  I thought maybe you would have people to swim around, but it goes very smoothly and people spread out as time goes by.  During the swim my goggles broke on lap 11 and my swim cap came off…  Hmm… That was just the start of all things bad that could happen.  Besides that, I finished the swim fine.  After you finish you start running to the transition area. 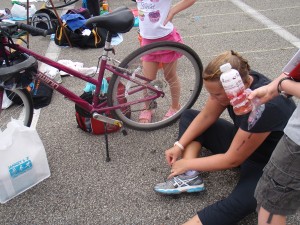 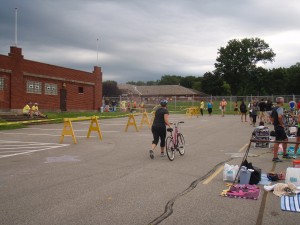 All set and off you go…  12 miles on the bike.  This part of the race was my biggest concern.  I was worried about that hill, but I made it up fine 4x.  I was huffing and puffing all the way up – but made it fine!!!  The kids watched each lap and cheered me on.   I get a little emotional during a race when I hear them cheer.  The short downhill section was my favorite!  I will say I only passed one person.  I was amazed at some of the strong people at this race.  I watched many a 60+ year old pass me by on the bike and the running…  That was my entertainment, knowing everyone’s age because it is on their legs.   I told you everything that could go wrong, went wrong…  My chain came off my bike at one point and I had to stop and fix it… which took at least 4 minutes.  It ended up being a nice break.

Back to the transition area to park my bike, take off my helmet, put on my hat and glasses and go run!!! 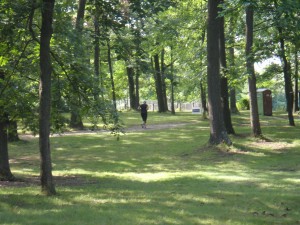 The run was crazy… Mostly uphill on a non-paved path.  It was a rocky path.  It was tough.  I actually fell after the first mile and landed on my bad ankle.  UGH!  I fell pretty hard and a few women stopped and asked if I needed help.  I got up with a little pain and kept on going… but I did walk some of the tougher spots to make sure I had my footing.  You have to watch out for large rocks, branches, and slippery areas.  I even heard the year before someone slipped and hit their head on a rock at the race…  The running course is not for wimps.  I am a bit of a wimp!!!  I did not like that run at all… but I finished!!!

Here we are… gotta love our trophy of wild flowers from our cuties! 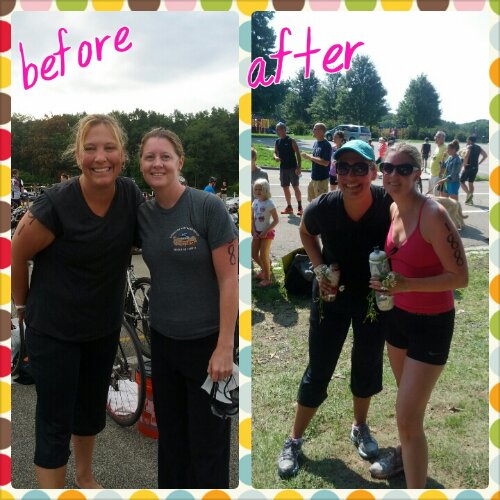 I am a triathlete!  So proud of myself!  Best part is that my son plans to do a triathlon now and my daughter wants to start running short distances!   If I can do it, anyone can do this!  Seriously!!!  So new goal… do it next year… thinner and with more training.  I just dread the run – which I will walk more of next time since I need my other ankle to stay medal free!  All in al, it was a fun family friendly race and a great workout!  It was super organized and I was very impressed by how smoothly it all went!  Checking off the bucket list…  what’s next?

Have you done a triathlon?  Any tips for me?