My friend Amy gave me this idea years ago and we use it every year. When it snows and the kids want to play in the snow and you don’t… bring the snow inside for loads of fun. This is a picture from last year. 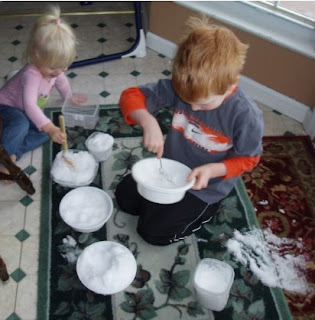 FROM AMY:
I don’t know about you but I wasn’t as excited about the snow as my kids were this morning. My children were convinced that it is time to sled ride and build snowmen. I tried to tell them that there isn’t enough snow. They weren’t convinced… .until we stood outside waiting for buses and then they realized they couldn’t go very far on a sled when they hit a patch of grass (bad scene). The only snowmen they could build was very small. So my suggestion to them and you is scrap some off of a smooth surface (our trampoline) and bring it in! I put my neat sheet down in the laundry room and let them have at it! I used a large bowl for each child and I dug out some kid’s kitchen toys. The kids were in their glory as they scooped snow cones and cakes. It gave me some time to get some work done. Enjoy! Amy
Google+